Stay up to date with all of the latest news with SZapp!

Hoping the brief rain was kind to those most in need and that more will come your way soon. A number have commented that it’s been one of the driest periods for some time. We empathise with the difficulty and struggle experienced by those on the land due to the dryness.

Another difficulty shared by many is parenting – oh for the manual! It is probably the toughest (and most rewarding) role in the world – and it never stops! It is arguably becoming more difficult with so many changes to society and ‘expert’ opinions that can deflate or affirm parents and carers actions, beliefs, morals and confidence. Below are some quotes from a mum, Sue Lively, who acknowledges the pressures parents and carers face daily, to inspire and boost parents and carers patience. Her article is online @ https://onetimethrough.com/25-inspirational-quotes-that-will-boost-your-parenting-patience/

SRAS is proud to be a WeMatter site, focussing on building firm wellbeing foundations for learning. The importance of this priority is emphasised in the Generation Next article below:

The ability to understand emotions contributes almost as much to students’ grades as their IQ.

IQ scores explain about 15% of the differences between students’ grades. Conscientiousness, such as having the diligence to do enough study, explains about 5%.

What is emotional intelligence?

Others also include character traits such as optimism, impulse control and the ability to motivate yourself. This is called “mixed emotional intelligence” because it is a mix of abilities and character traits.

Others tested emotional intelligence directly by measuring participants’ emotional abilities with skill-based tasks. For example, test takers might be asked to identify which emotion is expressed in a face.

Students who can understand emotions can accurately label their own and others’ emotions. They know what causes emotions, how emotions change and how they combine. Students who can manage emotions know how to regulate their emotions in a stressful situation. They also know what to do to maintain good social relationships with others.

We applied a statistical technique called meta-regression to examine what the effect of emotional intelligence would be if everyone had the same level of conscientiousness and intelligence.

For students who had the same levels of conscientiousness and intelligence, emotional intelligence was still linked with higher academic performance.

For students with the same levels of intelligence and conscientiousness:

Why is emotional intelligence linked to good grades?

There are at least three reasons why we believe emotional intelligence relates to higher academic performance.

First, students with higher emotional intelligence can regulate their “academic emotions”. Students may feel anxious about tests and performance. They may feel bored when learning dull material. And they may feel frustrated or disappointed when they try their hardest but still can’t quite get the hang of a task.

Students who can regulate these tough emotions will achieve more. Anxiety will not impair the test performance. They can push through the boredom and frustration to master dull or difficult material. They can learn from negative feedback or failure rather than be derailed by disappointment.

Second, students with higher emotional intelligence can form better social relationships with their classmates and teachers. They can get help with schoolwork or with social and emotional needs when they need it.

Third, many non-technical academic subjects require an understanding of human emotions and social relations as an inherent part of the subject matter. Analysing universal themes of love and betrayal in Shakespeare plays requires not just verbal skills but emotional knowledge and skill. Analysing the role of charismatic leaders in the rise of fascist regimes likewise requires social knowledge and analysis.

Our results show that teachers, parents and students should focus on student’s emotional skills not just for student’s well-being, but for their ability to succeed academically.

Swan Reach Area School is looking to partner with local industry to provide workplace-based opportunities for students in 2021 and beyond. The Government of SA has introduced a new Vocational Educational Training (VET) Policy to streamline opportunities for secondary school students to be able to combine their South Australian Certificate of Education (SACE) with VET, primarily in the form of an Australian School-based Apprenticeship or traineeship (ASbAs).

Swan Reach Area School will be offering Industry and Education Partnership meetings on Wednesday 19th May 2021. A member from the VET for Schools program, Rohie Griffiths (student pathways team) and I will be visiting local businesses and sharing the benefits of employing Swan Reach Area School students. 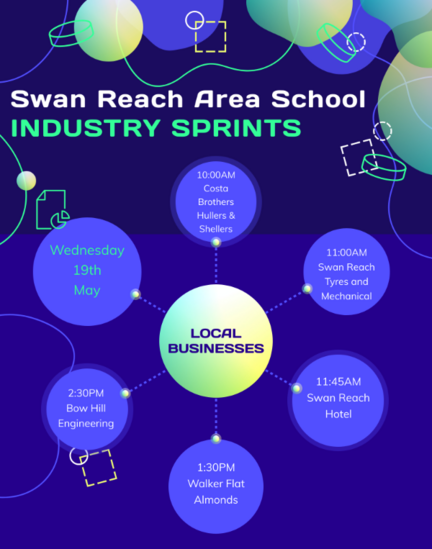 On the 23rd of May we have our first race at 'The Bend', Tailem Bend. It has been highly anticipated by the 'Black Swan' Racing team. We have had a huge influx of new riders and students interested in Pedal Prix and the team work that supports it. The race track at Tailem Bend is an exciting new venue which has been added to our Pedal Prix circuit this year.

We have built a new Trisled Trike, replacing our old trike. This is something that has been well overdue for our team and it will make us very competetive against the larger schools. Keep an eye on our new bike which displays the local businesses and organisations who have sponsored our team. We thank them for their contributions which helps cover, bike maintenance, race entrance fees and transportation.

Our team has been working overtime preparing for race day. This has included training extra hours after school (thanks to Mr Griffiths for organising and supervising this) as well as jumping on our practice bikes during lunch time.

On the 18th of June the Pedal Prix team will host a Pedal Prix Dinner fundraiser at the Nildottie Hall. We invite everyone to come along and enjoy the chance to meet the team and get a close up look at our new bike. We will display photos and video of our previous races and share our Pedal Prix experiences. Everyone is welcome to attend, but you are required to book in a week before hand by contacting Dot Haby (or leave a message) 0427 715 818.

Last week the SRC held their first meeting for term 2. During the meeting, the representatives read out the comments received from the student suggestion boxes which had been placed around the school in term 1. Some great ideas were received from students to improve the school. Some of these ideas included more casual days, updating the school uniform, increased sporting activities at lunch time and ways we can take care of our school yard. Some positive comments also received were
– It’s all good  - SRC are doing a great job  - All is pretty good.

The Mother’s Day table was also a great success and hopefully some of you may have received some goodies from the stall. Look out for another one around Father’s Day! Name:
My name is Ella.

How long have you been involved in SRC?
I have been a part of the SRC for 3 years, it has been interesting and enjoyable and a lot of the student’s voices have been heard.

Who are your role models?
I look up to Usain Bolt because he has worked hard to be where he is today and I think that is quite inspirational. Also because I like sports and he is the fastest person in the world.

What are your aspirations when you leave school?
I hope that when I finish school I will get a good job and leave with abilities that will help me when I am older, like socialising skills.

And lastly, what is your positive message for everyone reading this?
Don’t be afraid to go after your goals and do what makes you happy.

The Biggest Morning Tea will be held on Tuesday 25th May at 10:30am in the Swan Reach Community Library.  Due to Covid-19 restrictions Parents and Friends will be catering (NO BYO) and serving sweet and savoury scones.  Tea and coffee will be available. 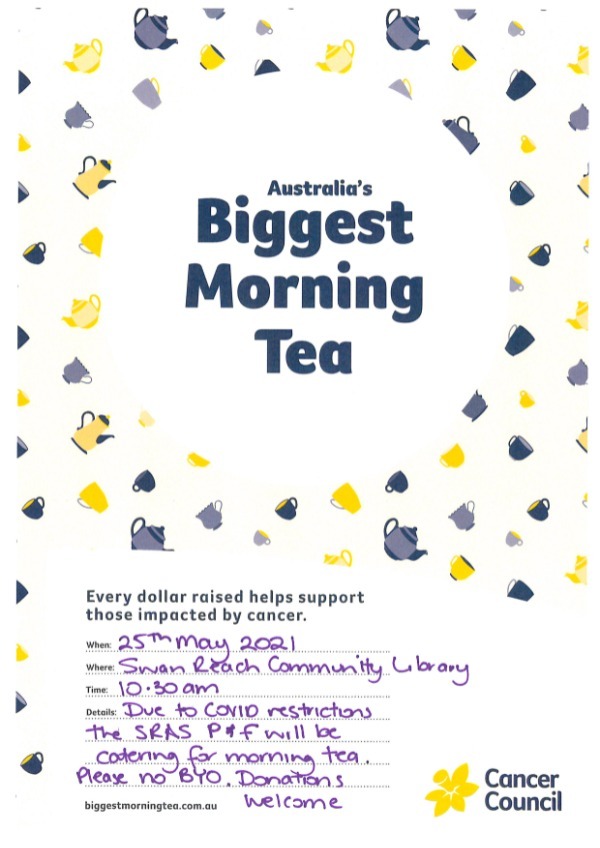 INTERSCHOOL SPORTS DAY
On 11th June the primary classes will be participating in a sports day with Cambrai Primary School.  Parents and Friends will be providing a sausage sizzle at $2 per serve for ALL students on the day (including secondary students).
Mardi Le Brun

Do you live in Swan Reach or the surrounding area?

Are you passionate about community led plans to improve the health and wellbeing of your region?

The Mid Murray Our Town Core Leadership Team is seeking to recruit a local community member who is innovative and passionate about working with others to improve health and wellbeing.

The Community Connector role is a 12-month contract position. The role requires 30 hours per fortnight, with an hourly contracted rate of $50.

The successful candidate will require their own ABN and related professional insurances.

The goals of Our Town are to:

If you are a great communicator, self-motivated, love working with people and want to play an active role in building and sustaining the wellbeing of your community, we would love to hear from you.

To apply for the position applicants need to:

Please note: formal qualifications are not a pre-requisite for this position but fantastic people skills are.

For a copy of the job description, Our Town plan and further information, please contact Amie Johnson on 0419 860 044 or email midmurrayourtown@outlook.com.

Due date for the next Newsletter is 10:00am, Wednesday 26th May, 2021.  The newsletter is distributed via the SZApp and school website.  Printed copies are still available upon request.

Articles can be emailed to dl.0423.info@schools.sa.edu.au  clearly marked in the subject box as Newsletter, faxed to 8570 2325 or delivered to the library/front office. Due to the way the Newsletter is now being set up, not all photos are included in the print copy, however there are several photo galleries included online and via the SZApp.

The Swan Reach Area School website is where you can find all the school information including the newsletter, forms and policies.  Please visit https://swanrchas.sa.edu.au.

Public Libraries SA has now released 'BorrowBox' which is a new platform for borrowing eBooks and Audiobooks. Say hello to your future library, wherever you are, whenever you are free.

To join you will need your library 'one card' login and PIN number.  If you have any problems please contact me at the library. 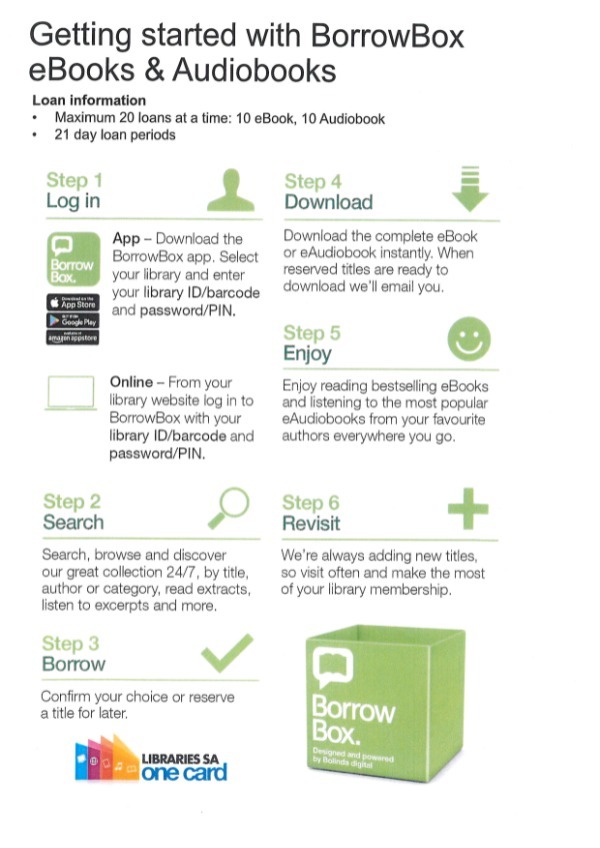 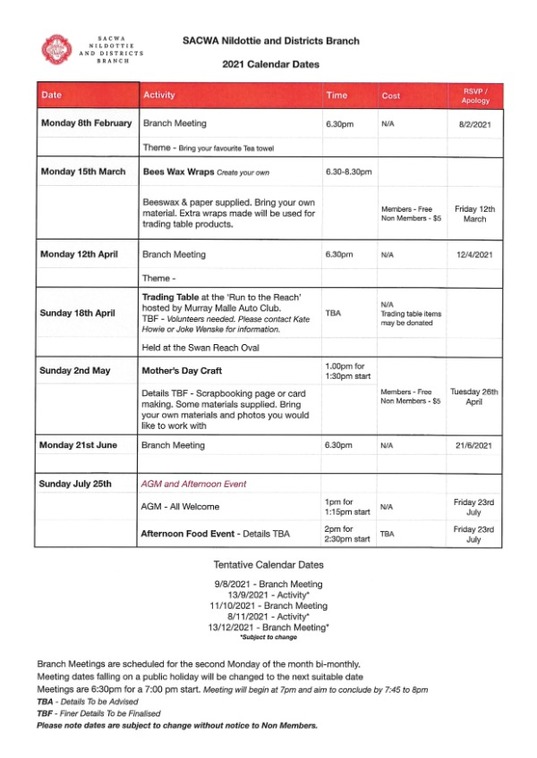 Swan Reach Christian Women's Group invite you to join them for Bible study and fellowship each month. 11am, second Tuesday of the Month at the Swan Reach Lutheran Church Hall.  BYO lunch.  For more information please phone Taryn 0427 702 377 or Josie 0419 708 224.  All welcome. 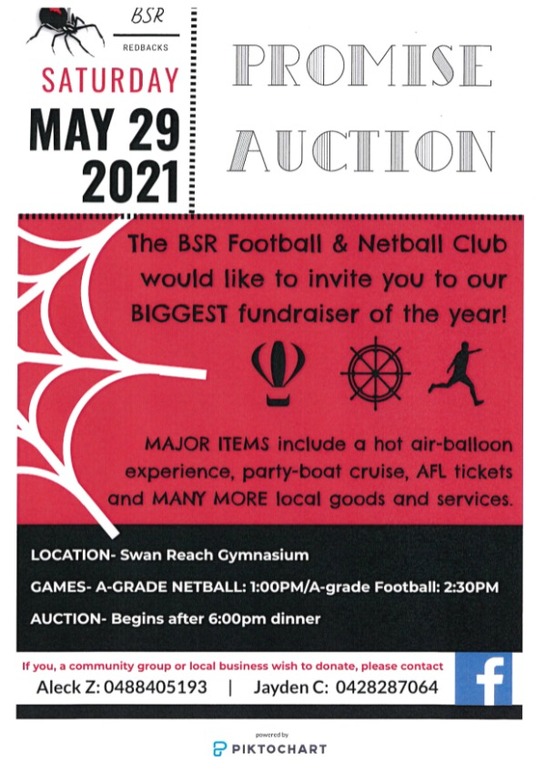 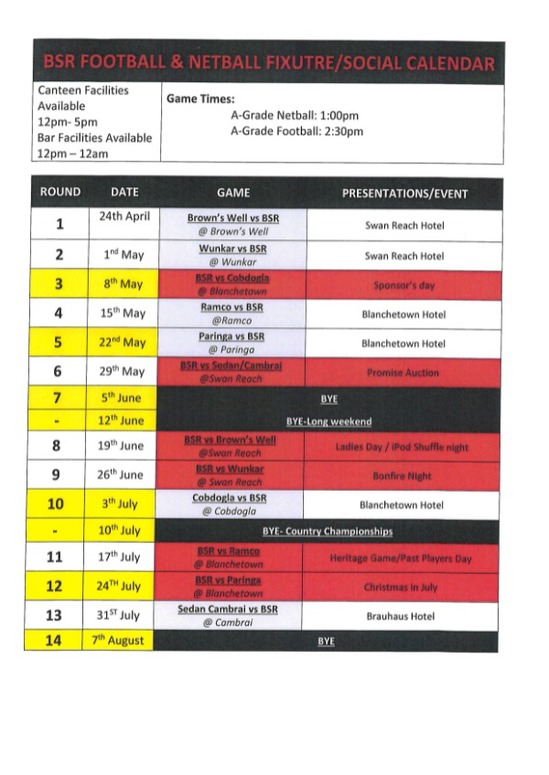